We are all Barcelona

We are all Barcelona

Thursday, August 17th, 2017; 4pm. I receive a call from an American family asking if it would be possible to do a dragon tour that evening, even though they know it’s very tight on time. I tell them that it’s absolutely fine, in a half hour I can leave the house and be in the Borne district at 5.15 pm, if they want. I get everything ready quickly and go out to take the underground at Lesseps. Having already marked my ticket, at the top of the escalators that go down to the platform, I realize that I have forgotten the felt masks we use to make the kids perform a role-play the legend of St George.

For a moment I think about going down to the subway and leave the masks and improvise something, but I know children enjoy this part of the tour very much and that it’s a very worthwhile moment. So I turn around and go home, to pick up the masks. Within the time of going home and coming back to the underground there’s time enough for a couple of trains passing, from 4.40 to 4.50 pm. I board the train at Lesseps at 4:51; I know that exact time because of a What’s App sent to a friend of mine that later told me she never got it because of the collapse of the phone lines & communications.

When we arrive to Catalunya station, the train stops and the doors open but never close. A few minutes pass by and there is a strange atmosphere. Until a female voice says that ‘due to an incident’ we must get off the train. The platform is full, and people pile up at the exit doors of the subway while a security guard says there is a terrorist attack upstairs and It’s more secure to not to move from there; he says if anyone who leaves the subway will do so by their own responsibility.

My heart goes so fast and I cannot believe what’s happening. My first impulse is to get out of there, because you always feel more insecure being locked up down there… People have their faces disengaged, and there are many people who enter the subway to take refuge, and there people start to hear there has been a massive rampage on Les Rambles.

I call the American family that is waiting for me in the Borne district, trying not to frighten them, saying that something happened in the centre and the best thing for them to do is to take a taxi back to the hotel, as we will not be able to do the tour that evening. With this man, Michael, we have talked so much earlier in the day that we are connected in a special way … He reassures me and tells me that he lives in the Middle East and that he is used to that, he says that everything will turn out well and asks me to call him when I can get home. I tell him that I am not at used to that at all, and that I am very scared at the moment.

I do not know exactly how many minutes later, the same voice that told us to leave the carriage says that we can get back on the train, the convoy will keep on going but won’t stop at Liceu or Drassanes, that will go directly to Paral·lel station.

I know there a girl just next to me, who works next to the Apple store and lives in Sant Cugat; we went down to Paral·lel and we decide to take a taxi together to go home. At that moment we start to hear ambulances & sirens and everything starts to turn upside down.

I get home and put on the news, and I realize what it’s it’s happening … I cannot believe it …

I call Michael and he tells me that they are already at the hotel, and that he is also watching on TV what is happening in Plaça Catalunya. It comes to my mind that if I hadn’t gone back home to get the masks I would have gone down in Liceu just at the time when that terrible thing was happenning… It could have happened to me or I could have found myself there and seen it, even if nothing happened to me … I thought that there could be friends of mine or that I could have been walking with my children or my parents to go to see the statues of Las Rambles … I am breathless watching people lying on the ground and feeling the general anguish. How unfair it was that these people were there in that precise moment, and how easily  any of us could have been there, actually…

Hours later I contacted the families of tourists that had tours booked for the next three days, thinking that they would surely want to cancel them. In fact, I think that if it had happened to me while visiting some European city with my children, with me being the client I would probably have cancelled the tour the very next morning… maybe I would not have been able to do it. The surprise was that not only did they not want to cancel them, they actually believed that it was very important to be able to go out to the street the day after, to do something nice that could distract the children from all that tension, at least for a while.

Many of them had spent many hours locked in the hotel, being very scared, not knowing what may or may have happen, others had been near Les Rambles and had suffered when seeing the atrocities close up and seeing how the children had been effected … a Mexican family told me that a taxi driver from Tangiers took them home for free with tears in his eyes, saying that he was very grateful to the city of Barcelona for everything It had had given to him, and that he could not be more sad about what had just happened. We have heard many nice similar stories to that one since; stories about empathy, solidarity, caring and helping. 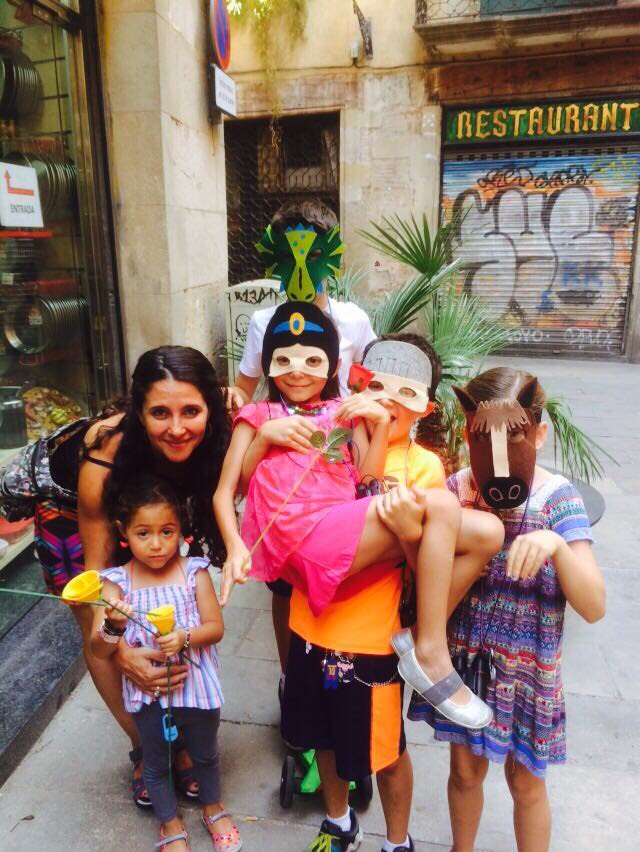 I was very impressed to see the strength of the people and the ability of the human condition to move forward and break barriers. We received calls from two other families who wanted to do something with the children to discover the city in a different way, especially those particular days … Finally some families that did not know each other wanted to join the same dragon tour the next day… we faced the fear together, and we talked about how we were feeling… and apart from identical feelings of fear, uncertainty, restlessness and anguish we agreed on the common desire of thinking about beautiful things and ‘caring’ about the city as much as we could… one of the Mexicans said “for us it was renovator to be able to go out looking for dragons and fight together against them”.

It was a lesson for me. And not because we can’t show the fear or because we have to be brave without letting us feel weakness or forcing ourselves and our lives to try to return to normality too quickly, quite the opposite. Obviously everyone was very scared. We talked a lot about feelings and fear and we let out what we had inside, sharing. But looking into the eyes and looking in the same direction, thinking that in spite of everything it was worth doing every step in the name of PEACE and RESPECT to the different cultures and religions, starting by LETTING OTHERS feel freedom and ones hearts’ amplitude, putting interest in how one lives and feels, and trying to UNDERSTAND without judging.

We shared that violence and hurting others never make sense. And we would like them not to exist… we ended up in Liceu, in the big dragon of the umbrellas house, adding ourselves to the silence and supporting from the heart the victims and their families. TOGETHER. 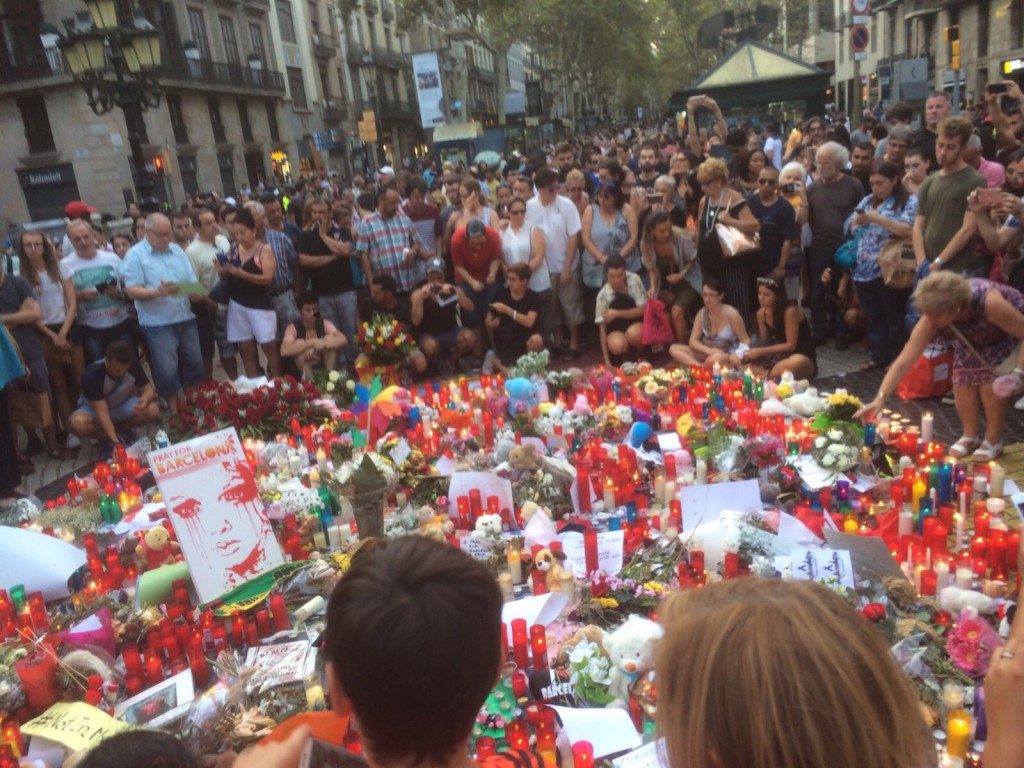